The tenth Active Broxbourne Sports Awards were held on Tuesday 20 November at The Spotlight, Hoddesdon and the 440 guests were amazed at both the level of international sporting success and the years of dedication to sport by local people.  Nominees ranged from Tokyo 2020 hopefuls to the team who have faithfully delivered the Borough’s programme of health walks over the past nine years. Local sports clubs and community organisations ranging from Mayhem Theatre Arts, Your Town CIC, Broxbourne Rowing Club, St Joseph’s Gaelic Football Club and Turnford Netball Club were all represented.

The twelve awards were presented by representatives from the awards’ sponsors; Ashbourne Insurance, Decathlon Harlow, The Pavilions Shopping Centre and VolkerWessels UK. The evening’s ceremony was hosted by Olympic silver medallist turned motivational speaker Gail Emms MBE who impressed the audience with her warmth and genuine enthusiasm. Nominations for the awards were made online and any individual living, working or playing sport in the Borough was eligible to be nominated. 145 nominations were received in total.

Peter Smits, Ashbourne’s Managing Director (centre) with the Joint Winners of The Young Sportsperson of the Year Award.

Sarah Smits, Ashbourne’s Finance Director (centre) with the joint Winners of the Volunteer of the Year Award.

The highly desired Community Club of the Year award was shared between Hoddesdon Boxing Academy Mayhem Theatre Arts and the Your Town Runners and Walkers. 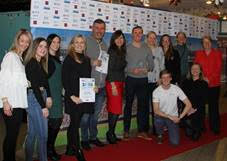 Award-winning, second generation family run Ashbourne Insurance has been offering a wide range of business and personal insurance for over 37 years with a claims advisory service. It is authorised and regulated by the Financial Conduct Authority (FCA).